This atrium view shows a plaza at the University of Wyoming Art Museum. Two aluminum panels from Sharon Louden’s “Windows” installation can be seen at the upper right. 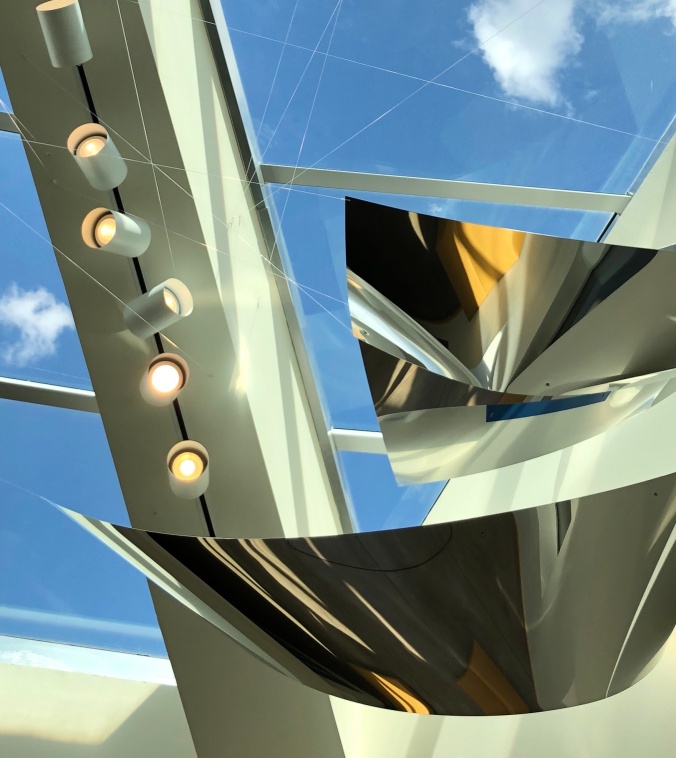 The University of Wyoming (Laramie) Art Museum is fairly small but had a few works of interest when I visited there last summer. The most stunning by far was an installation of dozens of 24″ x 96″ aluminum panels hung like sails and banners in the atrium. This massive piece, by New York–based artist Sharon Louden, is called, appropriately, “Windows.” The photograph above shows portions of two of the panels. I’ll have more photos, but I thought each deserved its own post instead of being grouped; there’s so much going on in any one view. The installation was designed especially for this space and thus, I hope (please please please), will stay permanently.

At an office building in Broomfield, Colorado.

The first night of my recent six-day road trip through southern and western Wyoming, I wrote these notes and emailed them to myself.
Yahoo Mail initially “corrected” Thermopolis to Thermopylae—which destination would have entailed a far longer journey. I am in Thermopolis, Wyoming, not in Ancient Greece, in room 26 of the Paintbrush Inn, a tiny mom-and-pop-type operation with an eccentric garage-sale decor. I traveled I-25 from Loveland to Casper, then U.S. Highway 20 over the Owl Creek Mountains and down Wind River Canyon. This part of Wyoming is made up of barren little hills sculpted by water and wind, distant mountain ranges, scrub, coal trains, wind farms, snow fences, cattle ranches, pronghorn antelope, and trailer parks. Also the excellent sign below, which was the subject of today’s first photograph and which I backtracked a mile to record.

Farther west of Casper, in the vicinity of Powder River, Wyoming, I passed a couple of antelope virtually on the road, so I pulled off at the same spot where a man driving a pickup-trailer also had pulled off. He wasn’t taking photos; he was adjusting something more securely on the trailer. As I pulled off, I noticed the Tumble Inn sign and pointed my camera there first, since the antelope had moved off some distance. The man walked over after a few moments and  said, “That’s an iconic sign. Somebody should take it and preserve it.” I agreed that it would be a great shame if it were to be destroyed. He shared with me the information that the now-defunct (and derelict) Tumble Inn had at one time featured a topless dancer, and that men driving to and from this place, which is sited outside the regulatory reach of Casper (to the east) and Shoshoni (to the west), had occasionally met their demise thanks to drunk driving.

The man reacted with dismay when he heard that I was headed to Yellowstone, which led to a conversation about the sheer numbers of park visitors and the crowded scenic drives in Colorado. “Everybody loves Colorado, but they’re going to love until they ruin it,” he said, and we speculated as to whether this had already happened. The man, who introduced himself as Gary and who was probably in his 60s, said that he was Arapaho, and that the traditional Arapaho territory was in the Loveland-Estes Park-Fort Collins area, where I now live. He himself had lived in Wyoming almost his whole life and owned a ranch near Riverton, on the Wind River Indian Reservation. His hair was tied back in a short, skinny ponytail that seemed unexpected given the rest of his haircut. He stuck out his hand when he introduced himself at the end of the conversation, saying “Maybe we’ll meet again down the road.” We didn’t, of course, but I would have liked talking to him more about his Wyoming.

At Shoshone U.S. Highway 20 turns north and eventually runs parallel to Wind River for several curving, beautiful miles. The traffic through Wind River Canyon is fast. I caught sight of a few signs marking geological time in the rocks exposed by the river. The first one I spotted said “Gros Ventre Formation — Cambrian.” The last one, “Chugwater Formation — Triassic,” indicated ochre-colored hills. In between I saw signs for Devonian- and Permian-age formations; there may have been others that I missed while zipping down the canyon with cars on my bumper, or while trying to find picture-taking sites. All told, the progression down the canyon covered more than 250 million years of geological time. I wished I had a miniature John McPhee, or a miniature geologist, on my shoulder to narrate details about the passage; it would be worth another trip to study the changes. Wikipedia says that the canyon was formed by tectonic shifts, not by river cutting.

The geology of Wyoming, or at least some of it, is the subject of McPhee’s excellent “Rising from the Plains,” one volume in his five-volume “Annals of the Former World.” McPhee, in consultation with geologist David Love of Laramie, reconstructs the geological events that led to Wyoming’s strange plethora of cross-cutting mountain ranges, many of which defy the dominant north-south trend of the Rockies. Despite having read this book three times, I can’t remember the particulars, but they can be summed up as “It’s complicated.” McPhee intercuts his story with tales of pioneer days, including fascinating excerpts from a journal kept by Love’s mother, who came to central Wyoming in 1905 as a frontier schoolteacher. I recommend both McPhee’s book and Annie Proulx’s “At Close Range: Wyoming Stories,” which jointly paint a picture of hardship and human extremes that parallel the extremes of the climate and the countryside here. 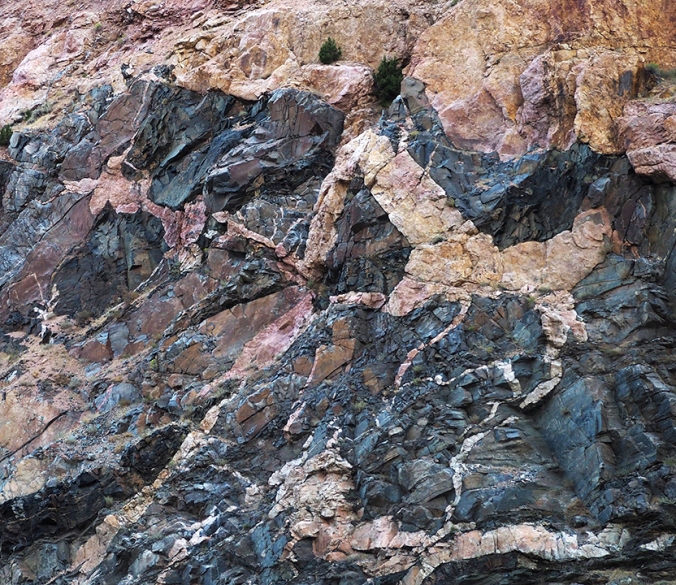 Some non-scenic sights from my recent road trip to Wyoming/Montana.

Poison Spider Road, Casper, Wyoming. I wonder if there’s a lurid story behind this sign. 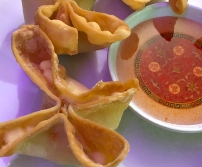 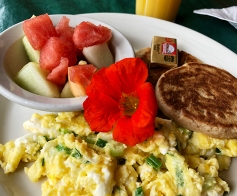 A nasturtium was served with breakfast at the Regis Café in Red Lodge, Montana 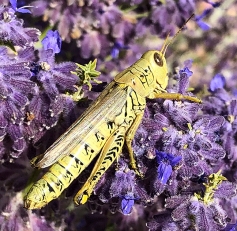 Cold grasshopper on sage outside the Wyoming Dinosaur Center 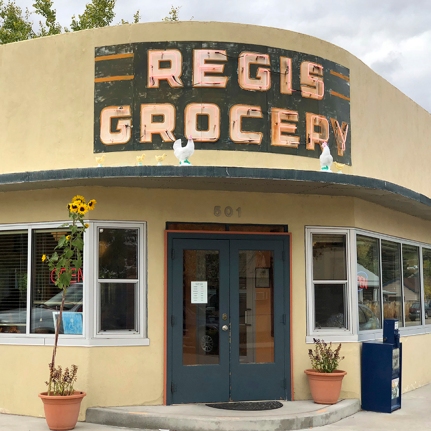 The Regis Café is located in the old Regis Grocery building in Red Lodge, Montana

The human need for decoration can turn almost pathological: cf. this wastebasket in the Paintbrush Inn, Thermopolis, Wyoming 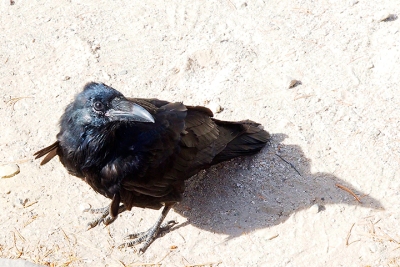 Yellowstone crow. It kept moving around nervously, so it was hard to get a good shot.

Detail of mural on 27th Street 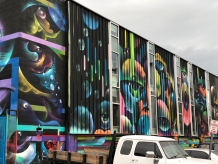 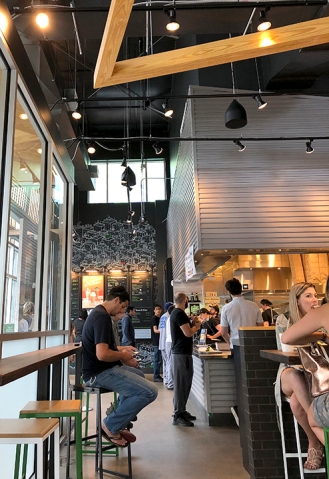 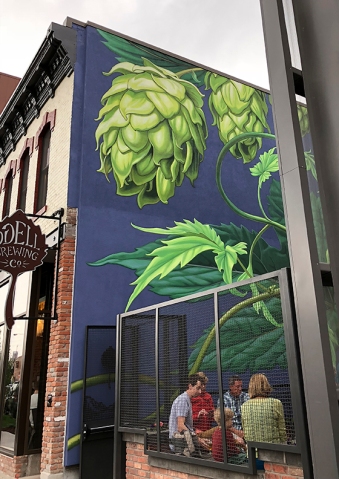 Today I dropped off a photograph for an exhibit at RedLine Contemporary Art Center in Denver (yay! finally got into a Denver show!). Afterwards I headed up Larimer Street for a bite to eat and found myself in what is now called the River North Art District (RiNo for short). It appears to be a rundown industrial warehouse district now partially converted into a trendy, edgy place full of brewpubs, coffee houses, smoke shops, and clubs, many of which host little art shows. It’s the kind of place where you may need to know by word of mouth that there’s an entertainment venue behind a particular unmarked door.

I got a burger at Denver’s recently opened Shake Shack, a chain I hadn’t heard of until the local news channels trumpeted this arriving business as if the second coming was at hand. Then I wandered a few blocks down Larimer Street to Denver Central Market, which houses various eateries and places to buy gourmet foods. In between I took photographs of some of the abundant street art in this district, mainly vibrant murals many of which take their style and inspiration from graffiti.

RiNo seems to be a rapidly changing area. To help label some of my images I consulted Google Maps, which had photos dating to June 2017 and September 2017. Already some of the murals have been reworked and many more appear to have been added. I hope someone is systematically documenting the street art in this area. It would make an interesting book.

The Bloch Building at the Nelson-Atkins Museum of Art endlessly fascinates me with the angles made by its ramps, windows, skylights, and corridors. Perhaps someday I can photograph it with a better camera. 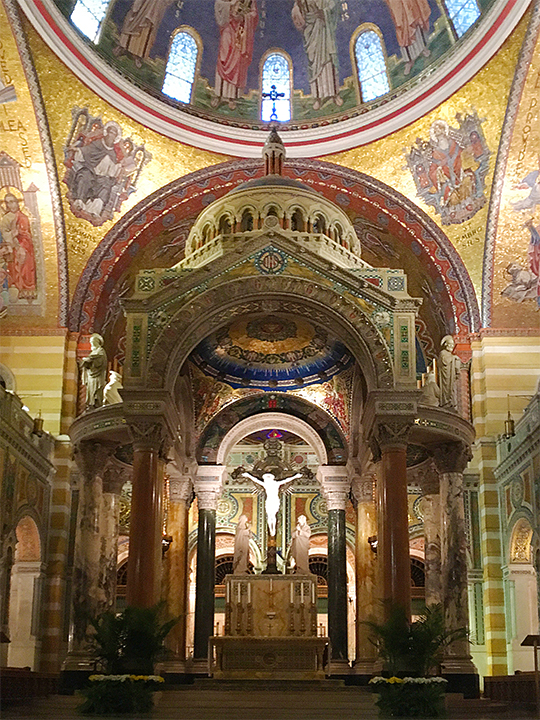 It isn’t new—in fact, it was dedicated in 1914—but St. Louisans sometimes refer to the Cathedral Basilica of Saint Louis as the “New Cathedral,” in contradistinction to the much smaller, historic “Old Cathedral” on the riverfront. These iPhone photos have been improved as much as my middling Photoshop capability can make them. The Wikipedia article about the cathedral has immensely better photographs. The Cathedral Basilica contains one of the largest collections of mosaics in the world. It’s something of a hidden treasure in the heart of St. Louis, not far from Forest Park. 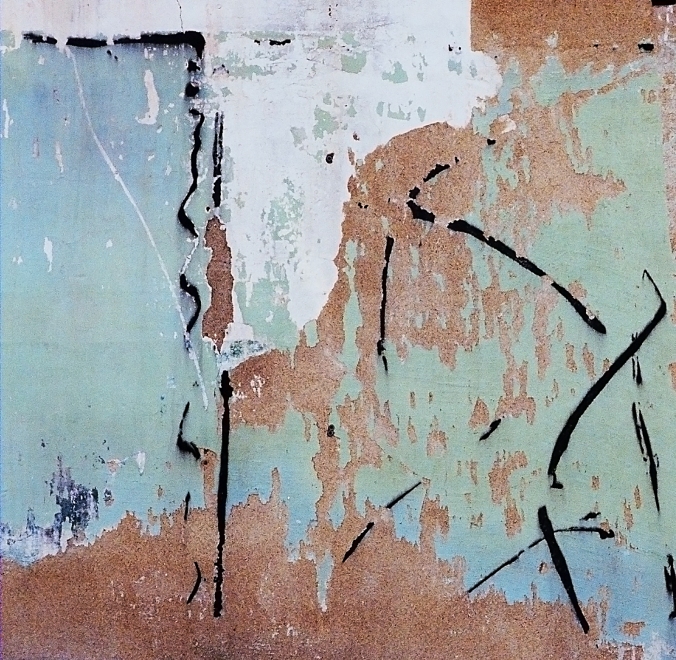 These photo is of a wall neighboring a burned and demolished building in Sesser, Ill. Digitized negative; color slightly saturated.