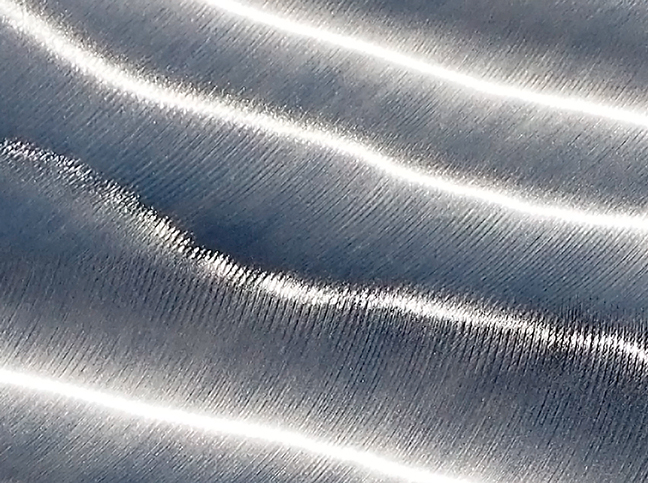 Closeup of textured stainless steel on one of the sculptures in Benson Sculpture Garden, Loveland, Colo.

It’s almost Valentine’s Day, so here’s a crazy-tight crop of an ice sculpture featured at Loveland, Colorado’s Fire and Ice Festival. The resolution is terrible, but I love the colors. iPhone photograph. 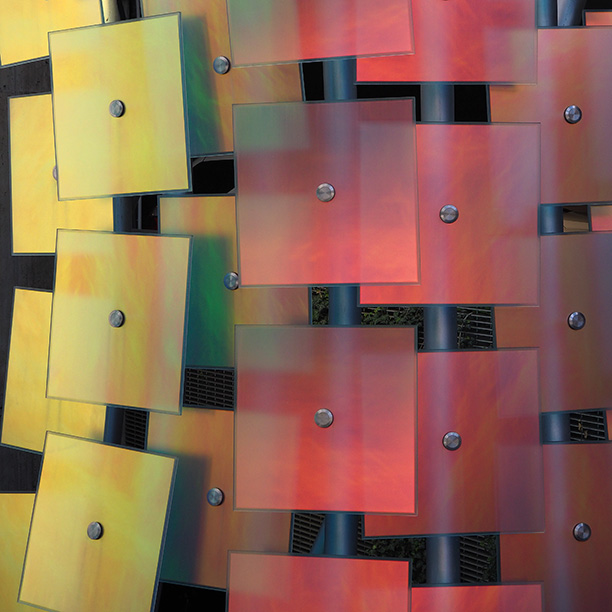 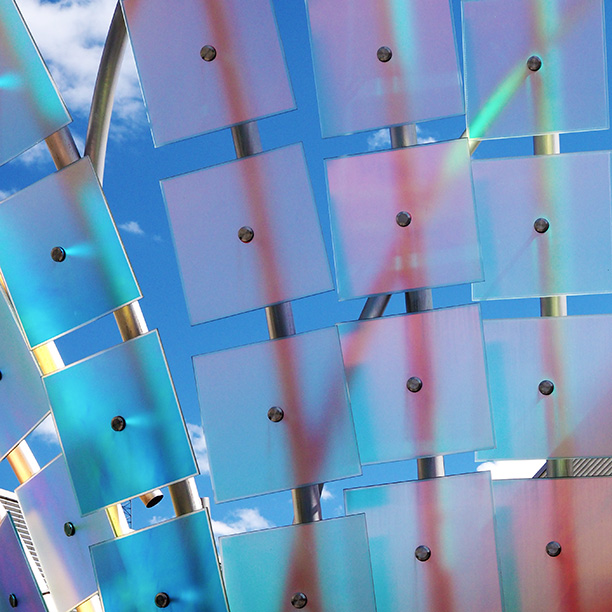 Here are two details from “Albedo” (2010), by Osman Akan. “Albedo” is a two-story-tall sculpture installed in an open area of the parking garage at the Denver Botanic Gardens. It’s made of dichroic glass panels affixed to long, vertical, curving steel tubes. As the identification sign explains, “Albedo is the measure of how strongly an object reflects light. It is an important concept in climatology, astronomy and computer graphics—a relevant combination of disciplines for the Gardens and for Akan, whose art specializes in the physics of light.”

At 3 p.m. on April 2, the sculpture was casting teal shadows on the wall behind it. I didn’t get a good photo of that, so I need to go back. It would be interesting to document how the color and intensity of the square panels change throughout the day, how they vary from sunny to cloudy days, and how they alter over the seasons. I also want to take photographs of this sculpture from which I can isolate even smaller details. I find the colors and the overlapping forms almost hypnotic in their effect.

“Spider,” by Louise Bourgeois, 1996. Permanent collection of the Kemper Museum of Contemporary Art. This sculpture has been adopted as the museum’s logo.

Detail of “Bacchus,” by Helen Frankenthaler, 2002. Permanent collection of the Kemper Museum of Contemporary Art. 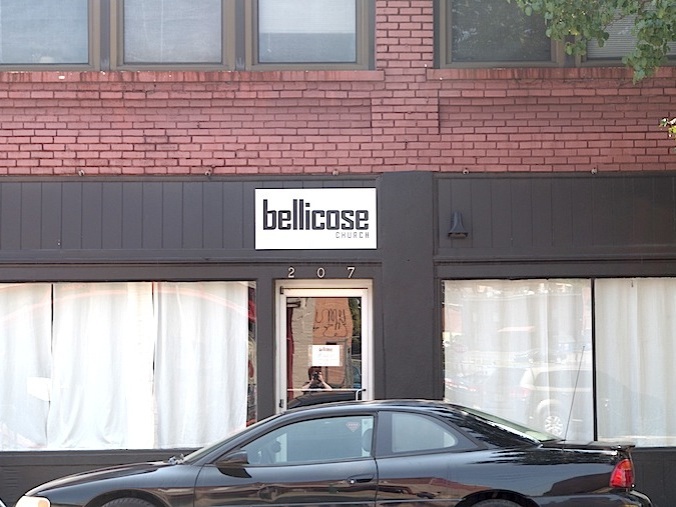 Yesterday morning I left the Boonville Comfort Inn before 10:30, ready to face the “major delay” promised at mile marker 77. There turned out to be no delay, so I ended up parking outside the American Jazz Museum in Kansas City a little before noon. This is in the 18th & Vine district, where Charlie Parker came to prominence, so I listened to some of Parker’s music while I was driving to K.C. to put me in the right mood. (For those who haven’t seen it, “Bird,” starring Forest Whitaker as Parker and directed by Clint Eastwood, who is a jazz aficionado, is excellent; see what Roger Ebert had to say about it here). The museum was small but had lots of listening stations. I wandered around looking at the exhibits and listening to some classic jazz. The place was deserted. I would like to also have seen the Negro Leagues Baseball Museum, which is on the other side of the same building, but my legs needed a break and my stomach needed lunch.

I decided to look for a lunch place while en route to the Kemper Museum of Contemporary Art, which had been a disappointment when David and I visited in 2012. Why the Kemper? Because the Nelson-Atkins Art Museum is closed on Mondays and Tuesdays, and I always seem to be going through Kansas City on Monday or Tuesday. Argghh!

On the way a no-left-turn sign diverted me from my route and I found myself in a couple of gentrifying blocks. I photographed the sign for Bellicose Church, on the assumption that it was indeed some sort of place of worship and not, say, the design studio of someone who’d given himself a peculiar name. The typography was uncommonly good for a small church, or for pretty much any church. But I thought it was funny, whatever it was. (I just now looked it up and no longer find it funny. It is a church—a “missional community”—with this action statement: “We named our church Bellicose because we don’t believe that Jesus wants his church to be passive. Therefore we’re inclined or eager to fight for people’s hearts (John 15:13), aggressively hostile to the gates of hell (Matt 16:18, Matt 11:12), and warlike against sin (1 Pet 2:11, 2 Cor 10:3-5) — we’re aggressive in our love for God and people.” Well, at least they’re honest about it. But God save me from people who are aggressive in their love for God. So is ISIS.

After photographing the church facade, I went into, and back out of, a place called the Corner Café. I am indeed a total rube when it comes to food. I’m reluctant to try anything with ingredients that I need to have defined or that seem bizarre. For instance, one salad came with espresso vinaigrette, which seemed to be overreaching for originality. Every lunch entreé involved one or more such oddities, so I after I visited the Kemper Museum I sat in my car in the parking lot eating the string cheese, carrots, and almonds I’d packed, which was much cheaper and probably more healthful.

I spent very little time at the Kemper, which was again a disappointment because the main building has only a couple of small galleries devoted to their permanent collection. However, included in those galleries was an absolutely wonderful purple painting by Helen Frankenthaler called, appropriately, “Bacchus.” It alone was worth the visit. I took some photos, none of which begin to do it justice. Then I fell for a ceramic vase in the gift shop, which is precisely what happened the first time I went to the Kemper. Don’t go in museum gift shops when you’re tired and hungry: That should be one of my mantras. There is a vacation phenomenon whereby you give yourself permission to spend money on such things even though you tell yourself not to. And here I’ve been getting rid of as much stuff as possible at home.

I decided not to take the turnpike to Lawrence, but to go the southern route, through Overland Park. Once I got off 470 and onto Kansas Route 10, it seemed like I was in Lawrence in no time. I found the main drag easily, ate cheese ravioli and spanakopita at a Greek/Italian restaurant, then hit the nature store and the toy store that I’d spotted on my first drive-through. Oddly, given that I’d just mentioned Mexican jumping beans in my recent blog post on spirit animals, the nature store had some of those little clear boxes of beans on the checkout counter–the first I’d seen in years. The sales clerk, an older woman, knew about the larva, and about why they jumped. Some of the beans were in sunlight, and they did seem to be jumping more than the ones that were in shadow. “Here,” she said, handing me a section of newspaper. “If you put that over the display, they’ll stop jumping.” I did it, and bingo, the jumping stopped immediately. That was impressive. I did it a couple more times and told her about my blog post. I bought a 50-cent plastic lizard as a mascot for the trip and also an inexpensive but lovely fossil, an orthoceras–an ancient cephalopod that navigated by squirting water out of its body. The toy store, which was jaw-droppingly extensive, made me wish I knew someone with a little kid. It would have been great fun to explore the whole place and buy tons of presents.

This morning, in my motel room in Lawrence, I decided that I needed extra sleep before going to the Spencer Museum of Art, my main reason for stopping here. I ended up sleeping all day. In the evening I called the museum, which the AAA Tour Guide said was open until 8 p.m. on Wednesdays, and a recording announced that it was closed for renovations until sometime in 2016. So that was that.

I’d forgotten that when I sleep in the daytime, my dreams tend to be more nightmarish than usual. Now I’m feeling very bad emotionally, with my legs aching from driving, and I’m beginning to think about aborting the trip. The drive out seems overwhelming, and the drive back, impossible. Given everything I’ve learned about Fort Collins real estate in the last two weeks, it seems a fool’s errand to go out there. I’m also worried about my sister back in Carbondale, who has descended from hypomania back into depression, and I feel guilty about leaving the dogs in the kennel for so long. I’ve decided to put off the decision until tomorrow morning. I showered after getting up at 5:30 tonight, so tomorrow I can just get dressed, throw everything into the car, and take off. Whether west or homeward, I don’t know.