The University of Wyoming (Laramie) Art Museum is fairly small but had a few works of interest when I visited there last summer. The most stunning by far was an installation of dozens of 24″ x 96″ aluminum panels hung like sails and banners in the atrium. This massive piece, by New York–based artist Sharon Louden, is called, appropriately, “Windows.” The photograph above shows portions of two of the panels. I’ll have more photos, but I thought each deserved its own post instead of being grouped; there’s so much going on in any one view. The installation was designed especially for this space and thus, I hope (please please please), will stay permanently. 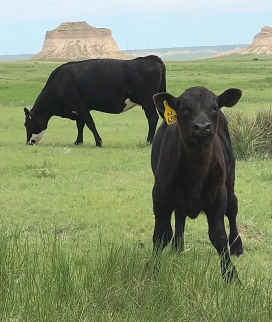 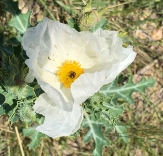 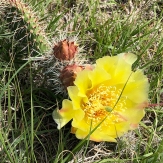 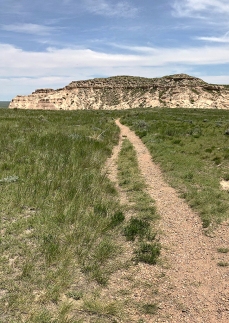 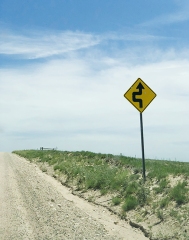 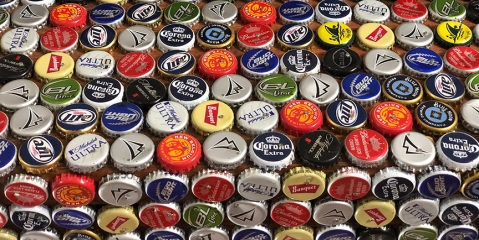 Last week a friend and I drove out to Pawnee Buttes, in the Pawnee National Grassland. This is on the prairie in northeast Colorado, not far south of Wyoming and Nebraska. It was a warm but lovely day. The grassland is beautiful: lots of miles on dirt roads; beautiful undulating hills; and the isolated buttes themselves. The only downside is the sheer number of oil and gas facilities out here, along with the accompanying truck traffic. In a time when it’s imperative that we phase out fossil fuels, I was discouraged to see the amount of fracking and other fossil-fuel extraction on this, one of our national treasures. 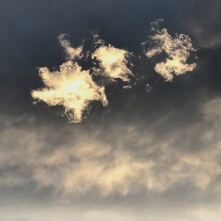 These were taken yesterday evening in Longmont. The iPhone is not good at handling sunset light. The photo with the tree is pretty true in terms of color, and I was able to color-correct the image at bottom right reasonably well. For the other two I gave up and decided to just enjoy that inky blue. 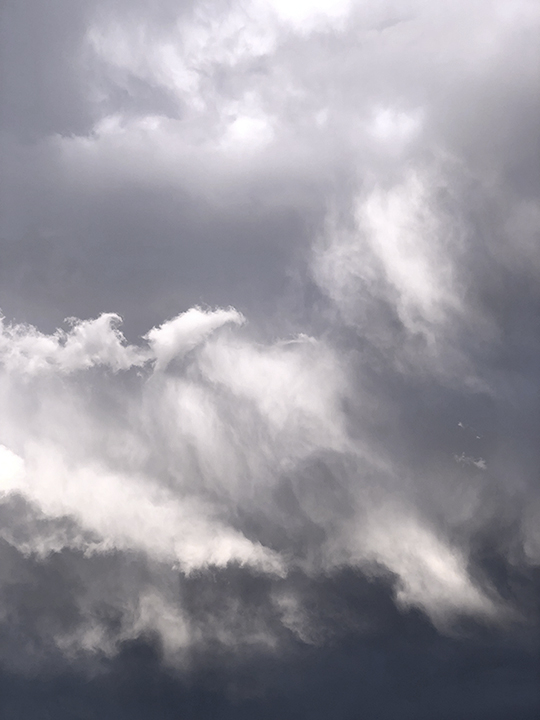 Clouds to the east

Yet another iPhone photograph, taken from a Loveland parking lot. I need to make a point of getting outside the house every day to see the clouds.

Looking west over the Beartooth-Absaroka Mountains from Rock Vista Point

Picking my road trip back up where I left off: On Day 3 I took the Beartooth Scenic Byway from just southwest of Red Lodge, Montana, to Yellowstone. I’d heard how beautiful this route is, and even though the day was foggy, rainy, and finally snowy, what I’d heard was true. This is, according to Wikipedia, the highest-elevation road in Montana or Wyoming, and somewhere recently I read that the rocks exposed at Beartooth Pass (elevation 10,947 feet) are Pre-Cambrian, making them some of the oldest exposed anywhere in the lower 48 states. The drive is through glaciated terrain. Near the top of the pass is a large plateau with many small alpine lakes. It started snowing as I drove across the plateau, and at the pass itself the view was totally obscured. The wind was up and the temperature was down to 28 degrees, so I didn’t venture out of the car.

The weather gradually cleared as I descended the west side of the pass. Aspens, a waterfall, and distant peaks made this a beautiful drive. The highway, which begins in Montana and then dips down through Wyoming, curves back up to Montana and the small mountain town of Cooke City, where it was snowing. Heading out from Cooke City, you come to the northeast entrance of Yellowstone National Park. 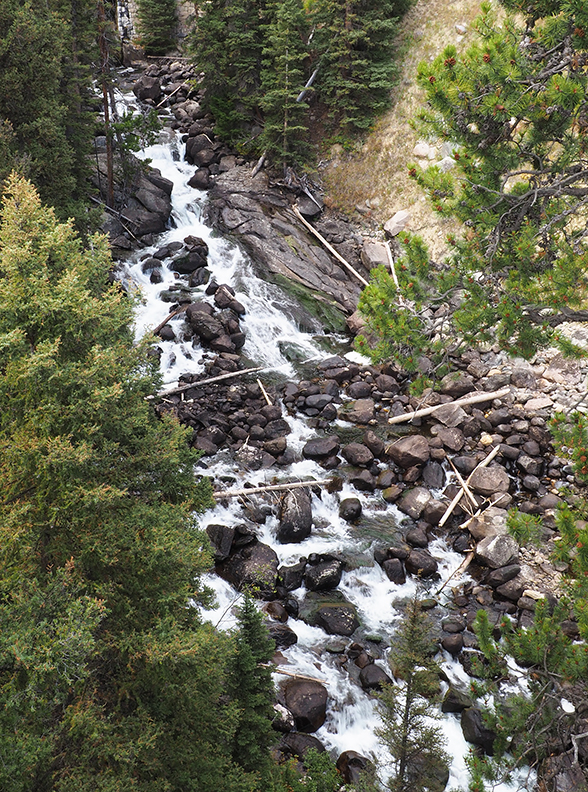 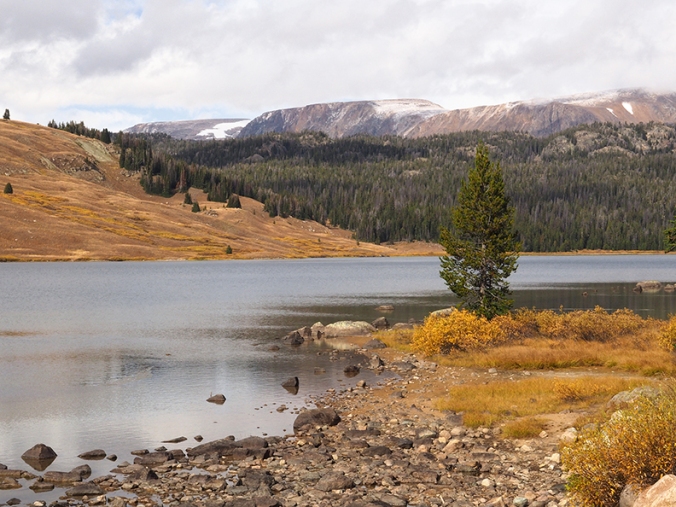 Almost as soon as I entered Yellowstone, I spotted two bison near the road. I was delighted. Well, little did I know that two bison were nothing compared to what was coming: whole herds! Buffaloes on the road, even. Buffaloes spread all across the Lamar Valley, where the snow had stopped, the sun had come out, and the meadows looked golden.

Looking east from the Lamar Valley toward the Beartooth Mountains

Braided river in the Lamar Valley

Cloud view to the southwest

As I got close to Mammoth Hot Springs, I could see steam rising from the far-off terraces. In town, elk were hanging out on the grounds of the local clinic. A couple of weeks earlier, a tourist had drawn the ire of a bull elk here and narrowly escaped injury. I parked at the clinic for a few minutes, where this bull elk was bugling and keeping his little harem pointed in the direction he felt was suitable. The sign in the clinic window, which I didn’t notice until I was looking at these photos, reads: “Elk present?!?! Use back door.”  This elk certainly looked and sounded like he didn’t want to be trifled with, and I took this photo through the windshield. Tomorrow: Hot springs and geysers! 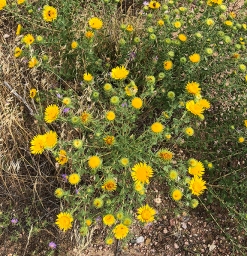 Hairy golden aster and other flowers 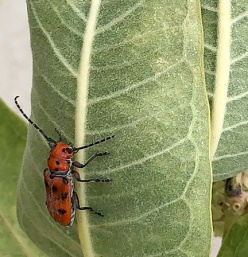 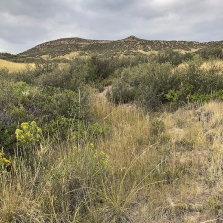 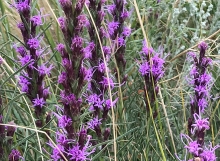 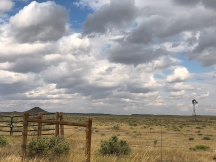 This afternoon I drove up to Soapstone Prairie Natural Area, located about 15 miles north of Fort Collins and about 10 miles south of the Wyoming border. The last several miles are on a very well graded dirt-and-pea-gravel road. I went to the north parking lot, where there was only one other car, and walked a short trail to a site that overlooks a former archaeological dig, now restored to prairie. This is some of what I saw. I’m still working on an identification for a couple of the plants. I’m also a bit puzzled by the rocks atop the fenceposts—are they decorative, or do they have some sort of significance I can’t read?

The sense of remoteness and the solitude were gratifying, very different from the isolation of being at home. It was a beautiful, unusually cool day for August and it was windy; my ears actually got cold. I was fine in a T-shirt but began thinking longingly of earmuffs; what a strange sight that combination would make! A hat or scarf would have done the trick. I want to return to this area soon with my Olympus and my binoculars.

Note: I have since learned that the purpose of the rocks is to divert water, thus preventing deterioration of the tops of the posts. Thanks to Michael Bliss for telling me this.

Creek along the east side 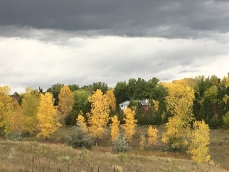 View to the north

These photos were taken at the Cathy Fromme Prairie Natural Area, just south of Fort Collins, Colo. This acreage, which has never been plowed, is bounded by two major roads to the east and west and by housing developments to the east and north. It’s lovely country, but the traffic noise is omnipresent. When I had walked about 15 minutes, it began thundering persistently, so I backtracked to the parking area. I didn’t get photos of the many flowers still in bloom, many of them very small and easy to overlook.

This photo puts me in mind of summer, but it actually shows a rare sunny January sky in Southern Illinois in 2013. In going through closets I found an old Canon point-and-shoot and discovered I hadn’t downloaded the images on the SD card. This was one of them. (Interestingly, in my list of tags for this blog, “Clouds” is followed by “Coffee,” which is followed by “Coincidence.” How perfect is that? If this reference is opaque to you, check out Carly Simon’s “You’re So Vain.”) 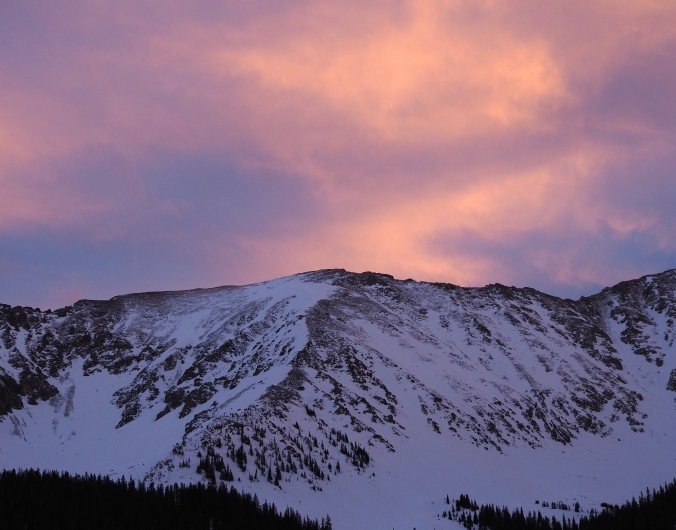 Recently I realized that I’ve been negligent about posting photographs of the Colorado landscape since I moved to Loveland. Here are three recent ones. The first was taken with my iPhone; the other two, with my new Olympus.

This is a copy of “Stormy Day,” the Isaac Levitan painting that I posted to my Facebook page recently. I applied a watercolor filter to the second palette crop. Actually, I think this palette is for another painting I’m working on that I’ll probably paint over. Whoops!

In searching for a photo of the Levitan painting, I came across many other paintings of his that I admire. See this site for a rich sampling of his work, especially “Shadows, Moonlit Night,” “Vladimirka Road,” and “Footpath in a Forest, Ferns.” The latter seems especially remarkable as a sort of Impressionism/Realism hybrid. Wow! Plaudits to I Require Art’s Facebook page for bringing to our attention the work of little-known artists such as Levitan, as well as lesser-known works by widely known artists such as van Gogh..

VAPOR AND FLOW
Blog at WordPress.com.