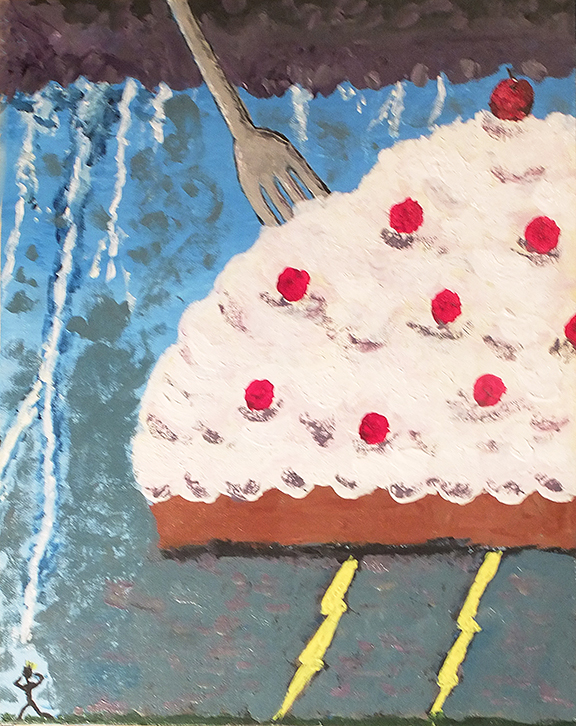 Well, it started as a storm cloud. Then it turned into a flying pie, and artist Wayne Thiebaud came to mind, and it turned into a killer pie. Consider this as outsider art with an in-joke, perhaps.

A few weeks ago I watched an Internet video of a sloth crossing a road with agonizing, preternatural slowness, and it suddenly hit me: The sloth is my spirit animal.

I conceived of it as a Steven-Wright–type joke:
“I found out that the sloth is my spirit animal, but I’ve been kinda slow telling people.”

This seemed hilarious to me, although only a couple of people on my Facebook page seemed to appreciate it. But the incident got me to thinking about the whole issue of spirit animals, which certainly seems to fall into the category of cultural appropriation by Caucasian New Agers of a Native American concept. But that’s a matter for anthropologists or activists.

What interests me is that only certain animals seem to be candidates for spirit animals. You never hear anyone claim the echidna as her spirit animal, for example. I can imagine the reaction these would get in a standup comedy routine:

“My spirit animal is a naked mole rat.”

No, it’s always a beautiful or strong or otherwise majestic mammal or bird. Eagles. Horses. Bears. Lions. Perhaps some inventive person somewhere has tabbed the Luna moth or the chameleon, but if so, I haven’t heard about it.

And after all, what would be wrong with an amphibian or reptile, an insect or crustacean? They have admirable qualities. Couldn’t your spirit animal be a jellyfish or a brittle sea star? How about a sea cucumber? The octopus is an extremely intelligent creature for an invertebrate; I’d be honored to have an octopus as my spirit animal.

It subsequently occurred to me that, in my case at least, one spirit animal is not enough to cover the territory. I can’t deny that I have sloth-like tendencies. But on other occasions my spirit animal seems to be the little larva inside a Mexican jumping bean that makes the jumping bean jump (a purposeful thing: it’s trying to move the bean to a cooler place; but it looks erratic). Other times, my spirit animal seems to be a termite colony. I figure it can’t be a termite, singular, because a single termite can’t really do squat; the colony acts like one huge Borg-like organism. So when I’m working hard and my brain is brimming with activity, my spirit animal is the termite colony. I seldom have days any more when I feel pretty, but if I did, on that day my spirit animal would be a leafy sea dragon.

When you think about it, all sorts of possibilities seem plausible. This could be a new party game: What spirit animal fits a given celebrity? Donald Trump’s spirit animal is the crocodile, I think, and Mike Huckabee’s appears to be some type of pit viper. The Kardashians (and I still don’t really understand who they are, nor do I wish to) collectively seem to be a horde of mosquitoes, constantly whining away on the media.

So much potential unexplored! The concept of a spirit animal, I think, has a lot of life left in it.

Most ordinary folks, meaning non-wealthy, non-paparazzi types, probably have had brushes with famous people—unexpected sightings of celebrities, the chance to shake a president’s hand, that sort of thing. Probably not many ordinary folks, however, have come close to inadvertently assaulting a famous person.

Embarrassingly, I am one of the few. I’m not proud of it.

Many, many years ago, Steve and I were in Washington, D.C. on vacation. One thing we did was to go to the Phillips Collection—a small museum in a large brick house—to see an exhibit of Bonnard and Vuillard paintings (if you don’t know ’em, it’s worth your while to look ’em up). The museum was deserted, with just one or two other visitors browsing the rooms. I tend to be a somewhat aimless viewer at times, and for some reason in that uncrowded setting I abruptly crossed a room to reexamine a certain painting.

Somehow I found myself virtually shouldering aside an older, stouter, taller woman who seemed rather put-upon. This near-collision happened very quickly—where had she come from?—and I excused myself amidst an impression of white hair, pearls, well-tailored clothing. As I moved away, I thought, “That woman is a dead ringer for Barbara Bush.”

Then I noticed that black-suited men wearing discreet earpieces had materialized at the doors to the gallery, and I looked more closely. Holy crap. I had damn near knocked down the First Lady.

How did I feel, besides clumsy and stupid? Lucky, very lucky, not to have been tackled or tasered by any of the black-suited men. (Actually, tasers probably hadn’t been invented when the first George Bush was in office.) How did the Secret Service guys know I was harmless? Despite the apparent beeline I had made toward Mrs. Bush, I must have seemed too obviously oblivious.

But the fun wasn’t over. It quickly became clear that the director of the Phillips Collection was giving Mrs. Bush a personal tour of the exhibition. Once I realized what was going on, I stayed well away. Steve, however, chose to deliberately interpose himself between Mrs. Bush and a painting she was looking at. His position was that he was just as important as she was. Well, of course he was. But my position, which I hissed at him after I witnessed this scene, was that, regardless of social equality issues, he was being rude. Also reckless, given the presence of the men in black.

All in all, it’s amazing that we weren’t both promptly escorted out of the building. The Secret Service rose in my estimation, since they somehow intuited that Steve and I were merely annoyances and not threats.

I have had one other brush with celebrity, but that brush was strictly figurative. I thought this one would have made Steve envious, but it didn’t. John Waters, whom Steve semi-revered, came to talk at the SIU Student Center. Waters’s movies aren’t my thing, but I figured he’d be entertaining. So I went while Steve, inexplicably, stayed at home.

I was almost late, and I took a little-used front entrance at the end of the building. This entrance doesn’t lead to the ground floor; it leads to escalators going up to the second floor, where all the ballrooms had been opened up for the talk (a large crowd was expected). No one else was around at this entrance; I was alone. But as I walked to the escalators, I noticed a little niche where an exit door from an auditorium was inset, and there was John Waters, pacing and smoking a cigarette. Illegally, of course. Well, the pacing was legal.

He was alone as well, with no handlers or Student Center staff protecting him. He was wearing a brown suit and bright orange leather shoes in some sort of alligator pattern. He looked nervous, reclusive, and not particularly happy to be where he was. Our eyes met very briefly. What an opportunity! Me and John Waters, by ourselves. I could have told him that I liked his writing (true). Or asked for an autograph. But I couldn’t bother the man two minutes before his talk, and what really could I say that would matter to him? “My husband likes your movies so much he owns a John Waters comb” (a PR item obtained for Steve by a close friend)? No. I think I nodded slightly. Then I just went on.

The cigarette did him good; he pulled it together before he took the stage. I had a seat in the far reaches of the ballrooms, so I couldn’t see if he still looked unhappy. But he was very funny in his wonderfully snarky way. And I’m very proud of not having come close to injuring him.