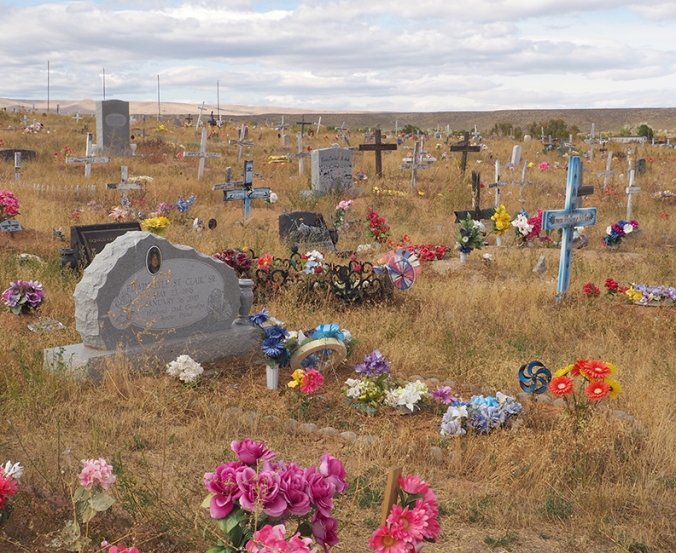 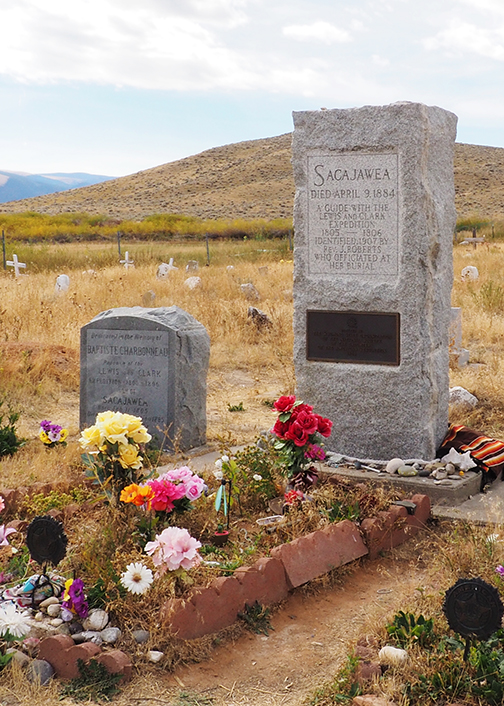 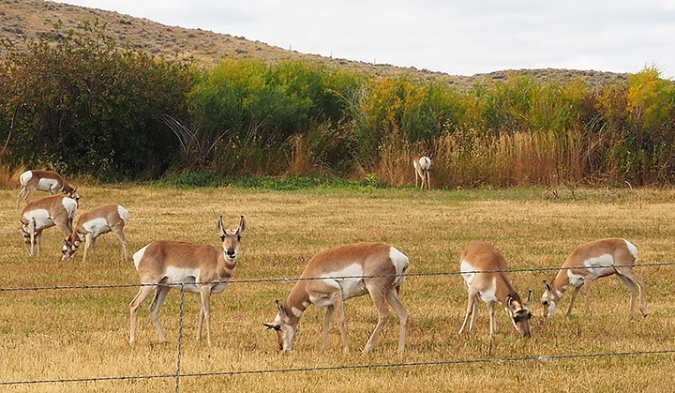 My drive back to Loveland from the Tetons took me through the Wind River Indian Reservation, where I saw a highway sign that said “Sacajawea’s Gravesite.” After a failed attempt to locate it, I got directions at a roadside shop, which took me to a small but colorful cemetery next to a field where a herd of pronghorn antelope were grazing. Some of the markers in the cemetery were brightly painted wood crosses; others were more-conventional stone. But all of the graves were dotted with artificial flowers and little knick-knacks. I don’t know if this is typical of present-day American Indian cemeteries. I also wondered if there might be a Latino influence here. Whatever the answer, it makes standard American cemeteries look pretty, well, dead in comparison.

But I digress. Sacajawea’s marker was about halfway up the slope. People had left all sorts of little offerings at the base. The infant, Jean-Baptiste Charbonneau, that she carried on the Lewis and Clark expedition has a marker next to hers. It seemed remarkable to me that my route home so unexpectedly took me within a mile of Sacajawea’s gravesite. It also seemed like a scandal that there were no signs, once you were off the highway, to point the way to this lonely, windswept cemetery. I paid my respects, wishing that I had some little thing to leave that would be appropriate.

Then, after I got home, I discovered that I might not have been paying homage to Sacajawea at all in that desolate place. There is, in fact, quite a controversy about Sacajawea’s death. Some documentary evidence that does not quite rise to the level of proof indicates that she died in 1812, in South Dakota. The cemetery marker I saw underscores an alternate hypothesis, also generally considered unproven: that Sacajawea survived, lived with the Comanches for some time, and eventually returned to her people, the Shoshone, on the Wind River reservation, where she died in 1884, around the age of 100.

Some websites mention the controversy; others simply state one or the other hypothesis as the truth. The only thing that can be said with certainty is that we’ll never know the truth about Sacajawea’s death.

So my trip ended with a mystery. It seemed fitting that this day also ended with a staggeringly dramatic sunset, which I photographed by pointing my camera toward the passenger-side window as I raced along with the traffic on I-25. It was past dusk. I didn’t dare try to pull off on the shoulder, and there was no exit handy. I just hoped that somehow the camera would focus well enough for one semi-sharp photograph. And it did.

What you see is what you get. iPhone photograph taken at the Fick Fossil Museum (Oakley, Kansas), which has as many local-history exhibits as it does fossil exhibits. I like to imagine that the townsfolk call it the Frickin’ Fick, but probably not.